People on a plane fascinate me. Conversations on a plane intrigue me. Time spent on a plane can be tiresome but for me, it is an opportunity to observe and write. On occasion, I am blessed with a seat neighbor whose stories shrink a 7 hour flight to what seems like a quick dash. Whether I am on a long-haul flight from Accra to New York or leading a group of students on a TVP Adventures excursion from Lagos to Nairobi, the hours on a plane never go a-wasted. Recently, I whipped out my pen and began to sketch some of my favorite encounters with Nigerian travelers across the years. I would eventually complete this list a few weeks later after exchanging banter with my parents about some of our shared experiences. Without each of these, a flight into or out of a Nigerian airport is incomplete. 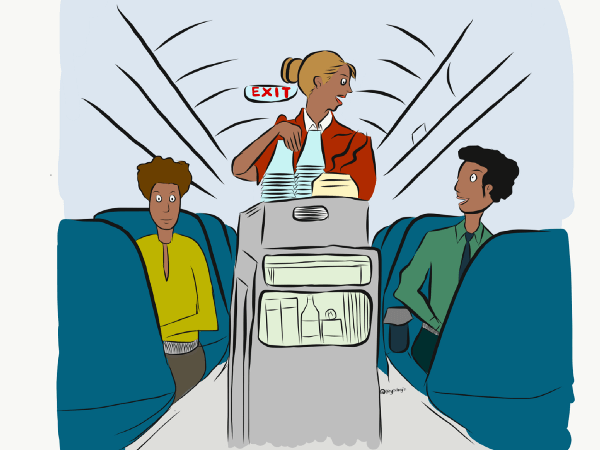 2. Ignorant Troublemaker —Her loud voice pierces through the hot and humid room where 250 antsy travelers await their boarding announcement. Half of the room is laughing at her but she mistakes it for a cheer. “In my own country? Is it because they look rich? How can you allow them board first?” Most of her neighbors have given up trying to explain to her that the business class passengers paid more and therefore, should receive preferential treatment. She eventually calms down when she sees the micro pod that is her seat compared to the large cubicles that are theirs. 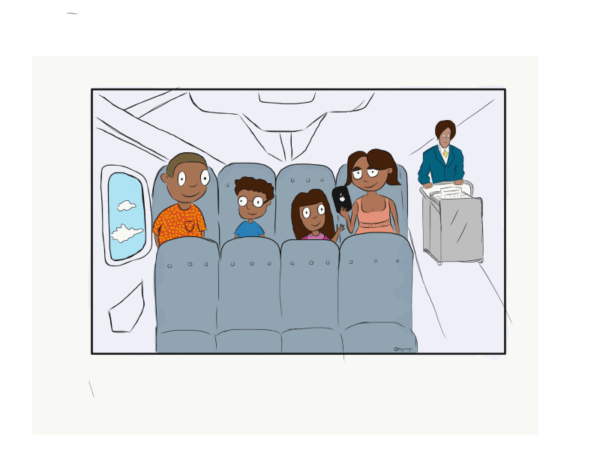 3. Summer in Houston Family — They could be going to London or Houston or Atlanta but this is their fourth trip of its kind. They will visit the same kinds of places — zoos, theme parks and statues — with their cousins who live in the city. The children who are dressed colorfully — the girl in purple and the boy in blue — eagerly ask their dad if they can watch Frozen…again. As their dad attempts to answer their unending but intelligent questions, their mum digs into her gigantic tote bag for her iPad…it is loaded with an array of games that will save her once Frozen is over and the kids become restless again.

4. Pregnant Woman — Her eyes are tired and she has eye bags from all the sleep she has lost in the last few weeks. She is so pregnant that in one more week, she would have become ineligible to fly. As she settles into her assigned seat and struggles to find comfort, she dumps her bags and coat on the seat beside her in hopes that it has not been assigned. In minutes, she has requested for three cups of water. Instead of a fourth cup, the attendant brings her a large bottle and an empty cup. “Thank you”, she sighs in relief, knowing that it will all be worth it when she returns home with her child and his American passport.

5. TB Joshua Pilgrims — There is no group more diverse than pilgrims to Prophet TB Joshua’s Synagogue in Lagos. Among them are blonde-haired women, dark-eyed men, curly-haired teenagers, two or three retirees and eight children. They are of all races and classes wearing uniformed t-shirts branded with ‘Miracle Crusade’. “We are going to see the prophet”, one woman mentions as she sees the curious look on her neighbor’s face. “Do you know him?” She eventually names prophet T.B Joshua after receiving a stern retort that Nigeria has hundreds of prophets — some miracle workers, most famous and all rich. After unsuccessful attempts to engage in proselytizing conversation with other passengers, the pilgrims hold hands to form a prayer chain as they wait for their boarding call.

6. Fussy Returnee — He has only been away from Nigeria for 5 weeks but is seated beside a family returning home for the first time in 17 years. It is his opportunity to prove that he is well traveled and unaccustomed to the faults around. “This is unacceptable, this cannot happen anywhere else”, he says at every given opportunity. Standing in line on the immigration queue, he complains about the faulty air conditioners while still wearing a sweater and winter jacket. Then he protests loudly so that the entire hall can hear his story — “this can never happen in Europe or in Texas. Even Ghana here cannot have this. Our leaders have failed!” By the time he clears through security and picks up his suitcases, everyone knows that he lived in Austria for ten years in the ‘80s, got his seventh degree in South Africa and is returning from a ‘round-the-world’ tour to Ottawa and Okayama.

7. New Grandparents — Her daughter had a baby two weeks early so she missed the birth. She excitedly shows neighbors photos of the baby while explaining the origin of its native and English names. Her husband argues with the air hostess as she offers to help him place his suitcase in the overhead cabin, insisting that he paid for the slot above his head and wants his suitcase in a particular spot. He is eventually convinced by the other passengers that his suitcase is safe wherever it is. As the plane taxis, he hurriedly speaks loudly to someone — presumably his daughter — on the phone. “we are coming o…we are about to fly!”

8. Importer Business Man — “Is this your first time travelling”, he asks as he nudges the woman sitting next to him. She is tired and has barely settled into her seat but replies that it is not her first time. He continues with enough words to allow him practice his accent of confused origin — rolled ‘rs’ and missing ‘ts’. He will go on to introduce himself with his given name as well as the name his friends call him (Mekky D), how many shops he runs in Alaba market and how many times he has been on this route to purchase his imports. For each shopping trip, he tells a story and flips to the page on his passport where the corresponding visa is stamped.

9. Drinker — “Would you like coffee or tea, Sir?” The extremely bubbly attendant asks as he makes his way down the aisle for the third time. The drinker asks for champagne or beer. “Sir, we only have wines — red and white” the host responds. Reluctantly, the drinker settles for red wine but is shocked when he is presented with a mini bottle. As the host attempts to pour the wine into a cup, the man taps his arm rest and remarks shyly “just give me the bottle and three others for later.”

10. Prayer Warrior — At every turbulent turn, she holds her hands together and screams ‘Jesus!’ She exclaims at takeoff and whenever the plane makes a sudden descent. “We will not die, I cover this plane with the blood of Jesus” she prays intermittently. She eventually leads the resounding applause from majority of the passengers when the pilot lands successfully. 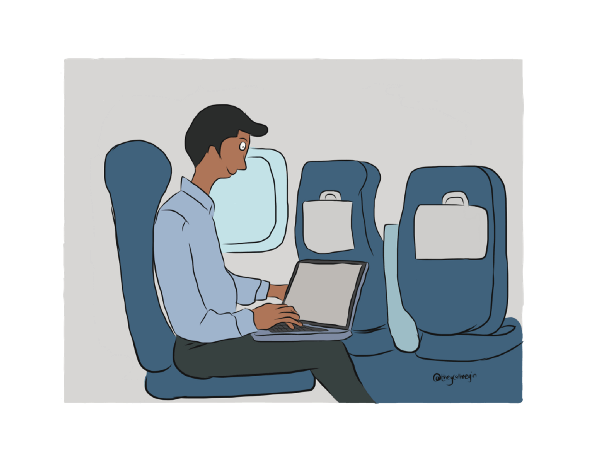 11. Middle-Aged Professional — He has paid a little extra to sit on the roomier exit row and whips out his laptop as soon as he is able to do so. But for a three-hour stretch during which he watches a film and takes a short nap, he works on reports and reads business magazines throughout the flight. He caresses his face from time to time and makes minimal contributions to political conversations going on around him. He will eventually be picked up by his chauffeur who nearly tumbles to the ground as he greets him, “Welcome, Sir. how was your trip, Sir?”

12. Impatient Travelers — They have been sitting on the plane for 13 hours but cannot wait 10 more minutes for the plane to come to a complete stop. The air hostesses are prepared for this moment and their lines are ready — “please, sit down until the plane has come to a complete stop!” But, they are speaking to themselves because at that moment, six more people stand up pointing to their crotch areas indicating that they need to pee. After a few futile efforts, one hostess unbuckles herself from her seat, walks to the cockpit to raise a complaint, and returns to her seat. The passengers will only sit again after the co-pilot makes his announcement, “Ladies and gentlemen, for your own safety, please return to your seat until the aircraft has come to a complete stop and the engine has been switched off.”

Did I miss someone? Share your experiences with ‘people on the plane’ by leaving a comment below. 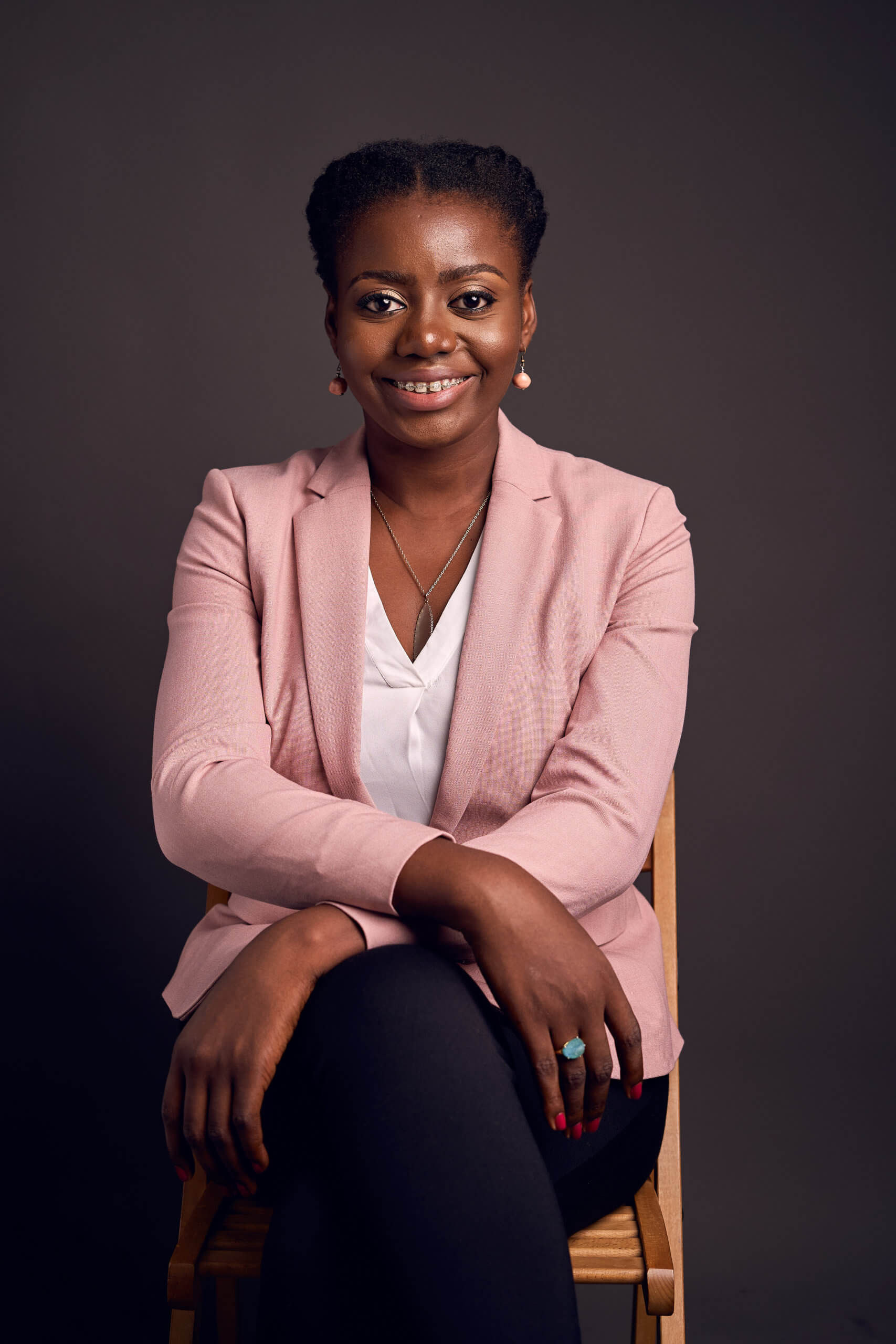